1. Organic Sulfur (OS) has a cleansing or "detoxifying" effect on the cells within the body. It allows the body to remove toxins that have accumulated in all types of cells, including fat cells. The suggested usage is 1 teaspoon full twice per day - one in the morning and one in the evening dissolved in hot water. Or, simply put the crystals in your mouth and chew them, or put a tablespoon in a liter or quart bottle, fill it with water and drink it all day. If you drink orange juice after taking the crystals, it tastes as sweet as fruit punch.

2. Organic Sulfur is not a drug or prescription medicine. It is actually a nutrient, or a food that the body can consume. People consuming Organic Sulfur Crystals rarely get the flu because the crystals make the body resistant to viruses.

4. Organic Sulfur increases flexibility in the tissues within the body and increases blood circulation.

5. Organic Sulfur reduces muscle inflammation, promotes healing in the muscles and prevents them from becoming sore. To a degree there is soreness and recovery, but return to normality is quickened. Athletes, in particular, benefit from this as the intake of additional OS dramatically decreases their recovery time.

6. Organic Sulfur eliminates so-called "free radicals" in the body. Allergies to pollens and certain foods can be reduced or eliminated by its use.

8. Organic Sulfur has been studied for possible anti-cancer effects. Because of the oxygenation of the cells and tissues, which creates an aerobic environment, cancer cells cannot exist. 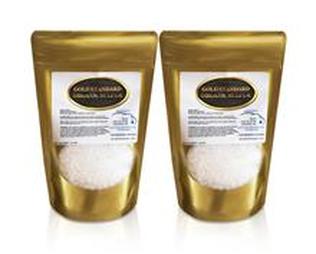 10. OS aids in healthy skin production and the reduction of "wrinkles". It is one of the main ingredients in moisturizing creams.

11. OS helps the body properly regulate insulin production. Adequate OS in the diet can reduce the need for insulin injections.

12. OS helps in reducing and often eliminating diverticulitis. Parasites living in the colon are unable to remain attached to the colon walls on which OS forms a smooth, resistant coating. Hatching worms, having nothing to grab on to, are flushed out.

14. OS, because of its ability to make cell walls more permeable, causes the body to rapidly release alcohol "hangover" toxins, removing them as waste from the body. The process happens far more rapidly than it takes to recover from a hangover, often as quickly as 20 minutes.

16. OS reduces hypoglycemia in the body because it has made it easier for the body to introduce blood sugar through more permeable cell walls. Less insulin is demanded for the process, resulting in less overuse of the pancreas. Several months of consistent OS usage can reduce or eliminate hypoglycemia entirely.

17. OS helps alleviate PMS. Glandular production is enhanced by OS to have more "normal" levels of production. Acid levels, enzyme levels and hormonal levels are more evenly balanced with OS. Cramps, headaches and nausea from the monthly cycle can be reduced or eliminated through its use.

19. OS can help alleviate eye problems. Dissolve 1 teaspoon of sulfur crystals in 4 ounces of water and use as eye drops as frequently as you like.