One of our main concerns when we ingest any substance or drug is what effect it is going to have in our body in terms of toxicity. Every health professional should be aware that toxicity is a matter of quantity and that any substance can become toxic if used in excess of safe dose.

Toxicity always depends on quantity and place. If one ingests a great concentrated amount of CD, he will experience strong irritations, although most people will not be exposed to quantities great enough to permanently damage the body. Massive inhalation is toxic because it occupies the alveolar space

Precaution 1
Although it contains “chlorine” in its denomination, it’s very different to hypochlorite (bleach), even though they often get mixed up. When we combine sodium chlorite with HCL, we generate chlorine dioxide, which is always yellow and has that pool smell. But if we combine hypochlorite with  acid, we create very strong and toxic gases, unbearable to us. Besides, the reaction of regular bleach and acid creates a lot of effervescent bubbles, something that doesn’t happen with sodium chlorite.

Precaution 2
Don’t inhale a lot of chlorine dioxide gases for a prolonged time, as they can cause throat irritation and respiratory difficulties. In small quantities and for a short time, it is harmless, as has been shown in the studies performed by Dr. Norio Ogata. Scientific documentation about chlorine dioxide’s toxicity refers to its inhalation, which is not the same as its ingestion in small quantities, which is harmless.

Precaution 3
We always add water to the mix we obtain by activating sodium chlorite with an acid, and that results in chlorine dioxide. It is never used in its concentrated form. If some of the liquid falls on the skin or the clothes, it must be washed with lots of water.

Precaution 4
Never use metallic containers! Metallic containers react to chlorine dioxide and will rust. This also includes stainless steel, as it is an alloy made up of several metals including nickel and chrome.

Precaution 5
Don’t use rubber droppers, since these don’t have enough resistance to sodium chlorite’s alkaline pH, and in time rubber can dissolve in the liquid, leaving particles in dissolution. Also, they are not adequate as droppers since drops are too large.

Precaution 6
Use only PP / HDPE/ PE ophthalmological droppers. All these materials are resistant and can handle both alkalinity and acidity (pH 13 / pH 1), keeping its properties for many years. We don’t recommend PET style translucent plastics to store concentrated sodium chlorite for a long time. In the long-term, they disintegrate and leave residues in the sodium chlorite solution.

PET (Polyethylene terephthalate), contains carbon atoms (the C in the drawing) and due to its similarity to oxygen, it has low electrons density. It is sensitive to react to sodium chlorite (NaClO2 ) due to its high pH, and then the polymer chains disintegrate in time.

​How can I know if the sodium chlorite is in bad shape? The product health indicator is its color. If the chlorite, which is translucent, turns milky after its activation, then it’s in bad shape. CD/MMS activated color must be always translucent yellow-amber, before reducing it with water. You should never use PET or translucent plastic bottles with sodium chlorite, due to its pH 13. They can be used with CDS because it has a neutral pH.

Precaution 7
Using citric acid as activator can provoke intestinal acidosis in sensitive individuals with diarrhea, discomfort, citrobacter (a bacteria that feeds on citrates). Although is equally effective, this mix should not be used if you have sensitivities. Use the HCL 4% Activator instead.

Note: Citric acid can be used to make CDS because it doesn’t go in the final mix. We only use the created gas that bubbles through the water, turning its color to yellow and saturating with chorine dioxide.

Get Jim's Book for more info. 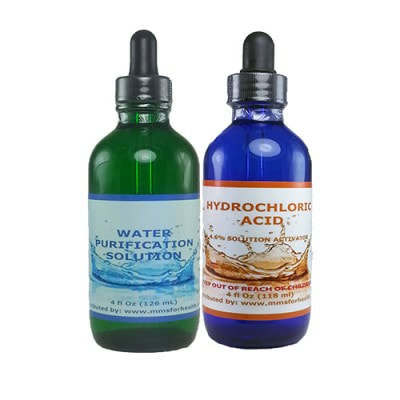