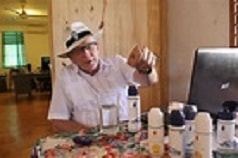 Jim in his 'Lab'
He perfected it, then gave it away. No
Patents, so humanity could benefit without a high cost.
Jim Humble is a HERO! :) :)

It's really satisfying to see that Jim Humble lived long enough to see that the FDA who has vilified him and threatened him for years for his work with MMS/CD, has now issued thousands of patents to use MMS/CD is so many different applications. Most importantly, there are several patents to use Chlorine Dioxide just the way Jim has been teaching people worldwide how to use MMS/CD.

But the hypocrisy is so overwhelming. Imagine that Jim Humble has been practically run out of ton because he dared to use MMS/CD to help thousands of people worldwide to heal from HIV and Cancer, using his MMS/CD protocols. You'd think the FDA the EPA, CDC and other three letter US agencies would be embarrassed, to now be using his protocols in a back door type of way, and making millions, issuing patents using his protocols in a backdoor type of way.

But in my book, Jim Humble gets the credit for patents issued after 1996, using rip offs of his protocols technology. Sad that he made no money even though there is so much evil and dishonesty. He deserves a Nobel Prize for his extensive work with MMS/CD. Jim Humble, you are our HERO!! :) :)

Patent for IV administration of Chlorine Dioxide issued by the FDA. Patent # US6086922A

​This is for a chemically-stabilized chlorite matrix for the parenteral treatment of HIV infections. In other words, the FDA had patented Chlorine Dioxide so it can be used via IV treatment in patients with HIV.

​The present invention relates to compositions and methods for treating cancerous tumors, including naïve, metastatic and recurrent cancers. The compositions comprise chlorine dioxide in an effective amount, which is injected into the cancerous tumor at least once, and often at least several times over the course of treatment.

​The chlorine dioxide compositions are injected directly into the cancerous tumor and the resulting tumor is effectively eliminated from the patient or subject over a period of one to several days to a few weeks, often after a single injection, or multiple injections at one session into the tumor. Often, an initial injection or multiple injections at one session are sufficient to dissolve the cancerous tumor. Often the cancer is eliminated (as evidenced by no remission) in a period of no more than several days to about two-three months and does not recur.

The pharmaceutical companies have also used Chlorine Dioxide to make an IV treatment for use in cancer patients who ​had Radiation Therapy. The drug WF10 (Macrokine, Immunokine) is an aqueous solution of tetrachlorodecaoxide designed for intravenous injection. Tetrachlorodecaoxide and WF10 were originally developed by Oxo Chemie using Chlorine Dioxide.
Tetrachlorodecaoxide / WF10 is used in the management of radiation cystitis, is effective in the treatment of diabetic foot ulcers, and is used in wound healing, where the mechanism of action is activation of the macrophage system, and increasing the partial pressure of oxygen in the wound.

Cancer patients with radiation burn wounds would benefit greatly from the healing benefits of this therapy. This also tells us clearly that Chlorine Dioxide can be used to mitigate the effects of 5G radiation poisoning. It neutralizes the radiation particulates so the body can eliminate them easily.

Then there’s the one for  The USFDA and  EPA has registered Chlorine Dioxide as being effective against the Coronavirus including SARS!

Not only that but it is also registered to be effective against many other viruses, including Ebola, Influenza, Polio, Measles, HIV, Herpes, EBV and many severe antibiotic resistant bacterial infections such as MRSA, VRE and MDRS!

On one hand we know that viruses are absolutely sensitive to oxidation and on the other hand, if it works in human blood bags at against viruses such as HIV and other pathogens, why would it not work organically against the coronavirus? Yes, the blood banks use Chlorine Dioxide to disinfect blood bags and sanitize blood.

This fumigation method is a great way to use CD to prevent or eradicate covid-19 from the body. It’s very sad that our own government hides such info from the people.

Note that CD also oxidizes heavy metals within the body. Metal build-up can lead to other severe problems like malfunctioning of the thyroid glands, and other endocrine glands as well as the nervous system, the brain and liver. CD will oxidize the metals, neutralize them and then the body gets rid of them. They are hiding this info and will persecute and harass anyone who decides to share the info with the people. Why? ​

Chlorine Dioxide is currently allowed by the EPA to be used to disinfect the drinking water in many American cities and not only is it considered safe, but also effective. Maybe your city water already has Chlorine Dioxide. Yet, they do not want us to put it in our water as often as we want to. They rather we did not know how good it is for our bodies when used correctly.
​​

How to Use the CD IV Protocol

How to Use MMS2 Capsules: ​ (Calcium Hypochlorite)

​1-2 capsules every 2 hours x 5 per day. x 21 days. Take with lots of water as
the stomach needs water to prevent discomfort, during the activation.
MMS 2 is made with CALCIUM HYPOCHLORITE crystals (taken dry in a capsule as described below and then washed down with at least 2 glasses of water. It's 'activated' by the acid in your stomach).When you ingest Calcium Hypochlorite (MMS2), it's activated by stomach acid and produces hypochlorous acid which is a potent germ killer, normally found in the body.

Understanding how to properly use MMS by studying Jim Humble's writings and videos is the key to 100% success in defeating just about any disease condition or infective organism known to man.

Some people give up on MMS too soon because of insufficient knowledge and understanding of how to use it correctly. If you get a sore stomach, or nausea, or feel sick after taking MMS, then you haven't studied Jim's info carefully enough to understand how to use MMS properly. 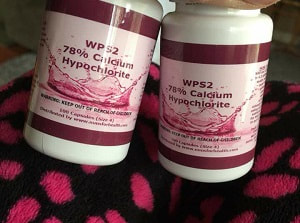 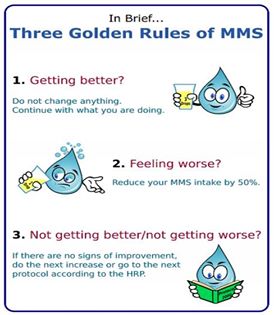 ​Disclaimer:   All of the information found within the pages of this website have neither been endorsed nor approved by the FDA. Our only intention is to provide a resource of material for educational purposes, & by no means do we aim to take the place of an appropriately liscensed & medically trained doctor.

As mentioned above, we at no time intend for the information within this site to prevent or treat disease, cure or diagnose - nor replace any pre existing medical treatments one may have been currently prescribed.

Please let it also be known that all outgoing links to other external sources or websites is also intended for educational purposes only, & has not been vetted entirely to be factual or 100% accurate. We assume no responsibility for information or products found on other websites - also including products included within this website.

We do NOT sell MMS/CD products. Let it be known that anyone looking to purchase the MMMS/CD products, also known as the MMS1 & CDS Solution - is expected to do their own due diligence regarding these products. We ONLY share convenient links to approved suppliers.

As already mentioned, we do not intend to act in any capacity that in any way interferes with advice given by a fully qualified medical practitioner - any information found in this website is not to provide the impression that self diagnosis is endorsed or supported by us.

Please be aware that the action of purchasing any such product or material mentioned here transfers the responsibility & possible culpability upon you, against any possible complications or damage, injury or loss experienced resulting from your voluntary exposure to any product, information or content found within this website.

Again, ALWAYS consult with your medical doctor or alternative heath care practitioner when dealing with any type of medical related issue.

You are 100% responsible for your own actions, if you chose to follow any information you find here. Please see our Official Website Disclaimer