The Church Bishops Arrest Smells of OVERT Hypocricy & Cover-Up
Why is the FDA Allowing Such a Farce to Harm Americans? 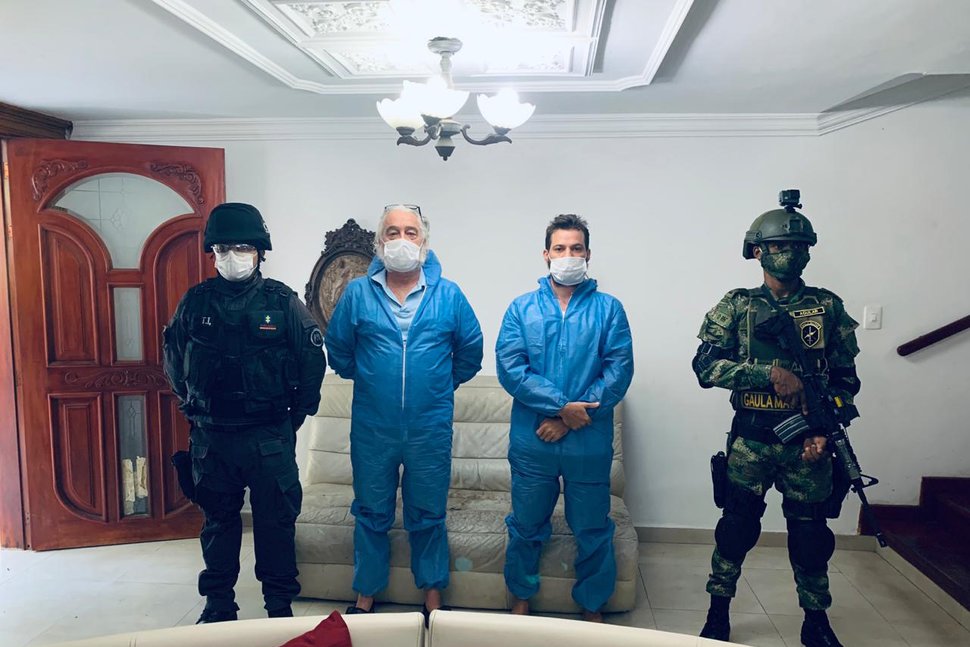 In this photo released by Colombia's Prosecutor's Press Office, a police officer and a soldier flank Mark Grennon, second left, and his son Joseph Grennon, during a raid in Santa Marta, Colombia, Tuesday, Aug. 11, 2020. Colombian officials say they arrested the two Florida men wanted in the United States on charges they illegally sold a bleachlike chemical as a miracle cure for the new coronavirus and other diseases.
​Is anyone besides me confused about this? This headline is so hypocritical...Isn't what they sell, the same thing that the NIH supported CD Covic-19 trial done in South America... Colombia and Ecuador used?

They're saying here we shouldn't drink it but they gave it to Covid-19 Positive people to drink in this study, and all of them became negative in seven days. I'm sooo confused.  This clinical trial involving chl*orine dio*xide, was documented by the US National Library of Medicine at ClinicalTrials.gov.

The study used oral chlorine dioxide (rather than intravenous) and is entitled, “Determination of the Effectiveness of Oral Chlorine Dioxide in the Treatment of COVID 19.” The trial was conducted by the Genesis Foundation and involves 20 patients. The ClinicalTrials.gov identifier for that trial is NCT04343742.   https://www.clinicaltrials.gov/ct2/show/NCT04343742

How can the Colombia Hospital use the products with success but then they get arrested for the same thing, saying it's fake?

Did you see the thousands of FDA patents to use Chlorine Dioxide in humans for treating all these different health issues? No wonder I'm confused.

Why the hypocrisy? Why the confusion? Why the nefarious nature of all this? I wonder if the products they used in the study came from the Grenons?

Chlorine Dioxide Generation for Water Treatment - Most Municipalities now use this to treat the city water you get in your homes.
FDA Patent #US5965004A  https://patents.google.com/patent/US5965004A/en
United States

Chlorine dioxide gas for use in treating respiratory virus infection -
THIS IS AN INTERESTING ONE SINCE THIS PATENT INFO EVEN MENTIONS THE CORONAVIRUS.
Patent # EP1955719B1   https://patents.google.com/patent/EP1955719B1/en

I am confused. Is there anyone who can explain all this? How can you jail folks for stuff you authorize? For stuff you are using in your clinical trials?
How can you mislead the public about the usage when you have so many million dollar patents for it's usage?
Do you all see why I'm confused?

When we ALL keep quiet about such blatant injustice, and they take everyone away one by one
​of two by two, when it's your turn... who will be there to speak up for us?

​FDA NEWS RELEASE....Read below and see if it jives with what they are doing with the patents...Oh, They sincerely want you to believe MMS and Chlorine Dioxide are two different products.  Seriously.

FDA Warning for MMS...They hope you won't know that MMS and Chlorine Dioxide are the same thing. :)

FDA Warns Consumers of Serious Harm from Drinking Miracle Mineral Solution (MMS) {They forgot that the EPA had this Clinical trial done.
https://www.ncbi.nlm.nih.gov/pmc/articles/PMC1569027/pdf/envhper00463-0059.pdf }

The  U.S. Food and Drug Administration is warning consumers not to take  Miracle Mineral Solution, an oral liquid also known as “Miracle Mineral  Supplement” or “MMS.”  The product, when used as directed, produces an  industrial bleach that can cause serious harm to health.
The FDA  has received several reports of health injuries from consumers using  this product, including severe nausea, vomiting, and life-threatening  low blood pressure from dehydration.

So Don't be fooled. Look at these FDA approved Patents to use MMS/CD.

MMS  is distributed on Internet sites and online auctions by multiple  independent distributors. Although the products share the MMS name, the  look of the labeling may vary.

The product instructs consumers  to mix the 28 percent sodium chlorite solution with an acid such as  citrus juice. This mixture produces chlorine dioxide, a potent bleach  used for stripping textiles and industrial water treatment. High oral  doses of this bleach, such as those recommended in the labeling, can  cause nausea, vomiting, diarrhea, and symptoms of severe dehydration.

MMS  claims to treat multiple unrelated diseases, including HIV, hepatitis,  the H1N1 flu virus, common colds, acne, cancer, and other conditions.  The FDA is not aware of any research that MMS is effective in treating  any of these conditions. MMS also poses a significant health risk to  consumers who may choose to use this product for self-treatment instead  of seeking FDA-approved treatments for these conditions.

The FDA  continues to investigate and may pursue civil or criminal enforcement  actions as appropriate to protect the public from this potentially  dangerous product.

The FDA advises consumers who have experienced  any negative side effects from MMS to consult a health care  professional as soon as possible and to discard the product. Consumers  and health care professionals should report adverse events to the FDA’s  MedWatch program at 800-FDA-1088 or online at www.fda.gov/medwatch/report.htm.

Are they investigating these folks?:  The study used oral chlorine dioxide (rather than intravenous) and is entitled, “Determination of the Effectiveness of Oral Chlorine Dioxide in the Treatment of COVID 19.” The trial was conducted by the Genesis Foundation and involves 20 patients.The ClinicalTrials.gov identifier for that trial is NCT04343742.
https://www.clinicaltrials.gov/ct2/show/NCT04343742 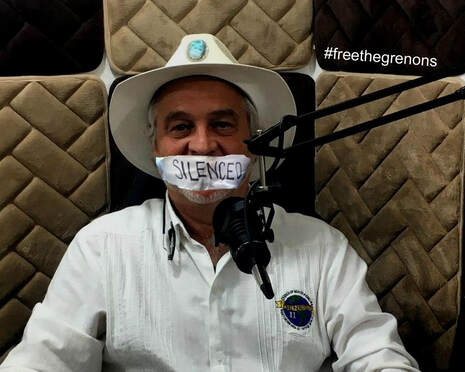 ​From Natural News website...
"Following the armed government raid on the Genesis II Church m Mark Grenon his three sons were arrested and jailed. To date, they have not been charged with any crime and have not been allowed to make bail. They are being held prisoner by the FDA as punishment for their use of  Chlorine Dioxide as a religious sacrament in their church worship practices.

A new website has now been launched to help raise funds for the significant legal fees already
​being incurred by the Grenons.  See the site here:  FreeTheGrenons.com
​Mark Grenon has also set up an email address where readers may contact him with
​messages of support or with financial donations. Use email protected

​
"Mark Grenon, whose vocal chords were damaged by a vaccine many years ago, has been one of the most outspoken proponents of using chlorine dioxide to beat cov!d-19 / coronavirus infections.

​Chlorine dioxide floods the body with instantly usable oxygen, according to a growing number of researchers, almost instantly killing pathogens while oxygenating the blood. Notably, many of the people who die from covid-19 infections actually die from hypoxia, or lack of oxygen.

The same medial establishment that has gone out of its way to destroy the credibility of hydroxychloroquine while pushing expensive, patented drugs and vaccines is also waging an all-out war on chlorine dioxide, utterly silencing the speech of anyone who advocates the substance. Chlorine dioxide — with the molecular formula of ClO2 — is dishonestly described by the media as “bleach.” That’s a lie, of course. Bleach is sodium hypochlorite and has a completely different molecular structure. The FDA, the EPA, CDC, HHS, they ALL know this.

The US medical establishment outright refuses to even consider the possibility of testing chlorine dioxide in clinical trials to see if it might help with covid-19 infections even though other countries have done so and are using CD in the general population with such good results. The reason, of course, is because they are aware of the results in countries such as Colombia and Bolivia that CD kills pathogens and ends infections with such high effectiveness that it would make their coronavirus vaccines obsolete.

Since coronavirus vaccines are the cornerstone of the new medical police state tyranny that aims to track every living being with “immunity passports,” denying them the right to work for a living unless they’ve been vaccinated, all those who offer real solutions that might render vaccines obsolete are being criminalized, raided at gunpoint and imprisoned or heavily fined.

The Grenons do not sell chlorine dioxide commercially, they provided it for church members to use as sacraments. They advocate for its use and encourage others to explore the knowledge base that’s currently available on the efficacy and safety of the substance. Check out the many FDA patents for its use.

While I'm not recommending that anyone else consume chlorine dioxide — each person needs to decide for themselves what’s appropriate for their personal health circumstances — However, IF you do have a kit and need guidance on how to use it safely and effectively I will support you.

I have consumed chlorine dioxide numerous times and have personally found that it achieves the following results:
There are so many FDA Patents to use CD for so many medical uses and other uses. so, don't believe their lies.

The FDA, of course, uses teams or armed government thugs to enforce its twisted opinions about what’s safe vs. toxic. The Grenons never tried to use guns to take away other people’s medical choices, unlike the FDA which does that all the time.

If you thought you lived in a free country, think again: The FDA is a tyrannical, lawless cartel of Big Pharma hacks who invoke armed federal agents to hunt down, arrest and imprison church employees whose religious beliefs defy the thought control indoctrination demands of the medical establishment.
That’s full-blown tyranny. And it shows just how desperate the medical establishment has now become in its question to censor all speech about coronavirus cures in order to clear the way for mandatory vaccines.

We are all living under medical tyranny, and the Grenons need your help. The zombie apocalypse is coming and the Grenons are too smart to not help humanity with CD, so they locked them away so humanity suffers. We need them home with their families.

Consider donating whatever you can afford to their legal defense. The Grenons live humble lives with humble means. They have no real money and pour all their dollars back into their church operations to help people worldwide." whatever money they had was confiscated. the sons have wives and two of their wives gave birth since their husbands have been jailed for helping humanity.

Support them now at:
FreeTheGrenons.com