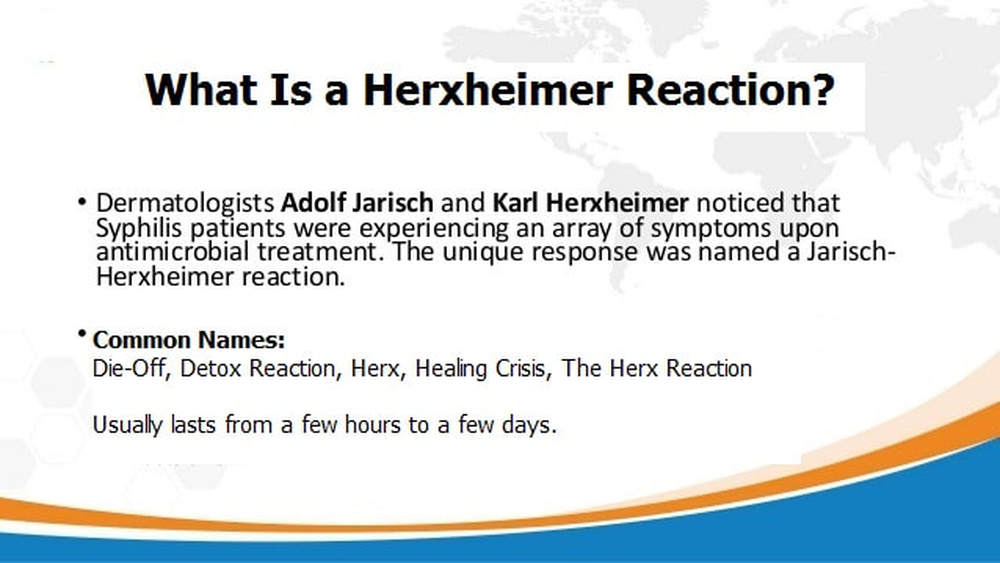 ​There are many stories on the Internet about the “side effects” of CD.
The definition of a side effect is: The unintended or secondary effects of a substance.

When people describe what they believe to be side effects of CD, they are actually talking about a Herxheimer reaction. Jim Humble’s original chlorine dioxide (MMS) protocols called for higher doses per hour ramped up much faster than we titrate up for current. In some cases that resulted in nausea, vomiting, and/or diarrhea. Critics of CD claim that a Herxheimer reaction, which is the result from ramping up too quickly, is the body’s reaction to being ‘poisoned’ by chlorine dioxide.

This is absolutely not the case, as the study by Judith R. Lubbers and colleagues found that when healthy individuals were given minimal doses of chlorine dioxide in increasingly higher concentrations, no deleterious effects were noted.

Herxheimer reaction or jarisch herxheimer reaction is a common detoxification response of the body to the increased toxins released during a treatment for pathogens such as bacteria, parasites, or candida, or while dealing with toxins removal protocols. When you have a herxheimer reaction, it means that the amount of toxins released into the circulation is more than what your body can safely handle quickly. The high level of toxins put a lot of stress on internal organs, especially the colon, liver and kidneys that are involved in filtering toxins in the body.

A Herxheimer reaction indicates that the patient is suffering from an overload of pathogens/toxins. If the person taking CD has a fair amount of pathogens, the rapid killing of these invaders produces excess toxins in the bloodstream. It is these substances that the body wants to rid itself of in short order. People with illnesses often have impaired Methylation Cycles that reduce their ability to eliminate toxins, making it even more difficult to handle an influx of toxins. So LOW AND SLOW is the way to go.

Do you have to feel bad in order to feel good?

Detox is great, it’s what we want, but without stressing the body further. We need to stay just beneath a Herxheimer reaction.

​Healing crisis or herxheimer reaction usually occur when the amount of endotoxins released by the dying bacteria, parasites, candida or other pathogens is more than what your body can safely handle. As a result your existing symptoms may become worse, often with new symptoms. While a healing crises may be a sign that pathogens are being killed, it is often a sign that the treatment is too aggressive. In many cases, the treatment has to be stopped due to a severe herxheimer reaction and high discomfort level.

There is however, even a bigger concern. The high level of toxins can put a lot of stress on internal organs, especially the colon, liver and kidneys that are involved in filtering toxins in the body.
​
Based on our experience, working with  cases of candida, parasite, heavy metal toxicity, liver cleanses and other body detox plans, we have found that a healing crises can be avoided or minimized in the majority of the cases. We hope this information will help you to minimize the many discomforts and risks of herxheimer reaction, so you feel better, without feeling worse first.

How to prevent a herxheimer reaction
The colon is the primary organ in the body responsible for removing toxins from the body through normal bowel movements. For this reason, making sure your colon is cleansed so it can quickly eliminate the high levels of toxins released during the treatment is the most important step when treating any condition that involves pathogens or toxins removal from the body.

This critical step is often overlooked, and is the main cause of the healing crises and herxheimer reaction many people experience during the treatment; it just takes the body too much time to eliminate the released toxins.

A Herxheimer reaction can present itself in many forms including: ​

​
​If any of these symptoms appear, suspend the remaining doses of CD for the rest of the day. The following day, return to the number of doses given when the patient is stable, which is usually the dose that was given the day prior to the Herxheimer reaction. Do No stop treatment, just lower the dose, to the dose that did not cause the herxheimer reaction.

To mitigate a Herxheimer reaction from chlorine dioxide, you can give vitamin C or orange juice, as either one of these will cut the effects of CD immediately. To help bind the excess toxins you may want to try activated charcoal, bentonite clay, (be aware that these both can cause constipation), or burbur (a liquid detox extract).

Other Herxheimer reaction treatments typically focuses on:
If you already experience a herxheimer reaction you can colon cleanse to help your body remove dead toxins.
​
DO AN OXYGEN COLON CLEANSE
Cleansing your colon should be your first priority as it is specifically designed to remove the toxins quicker from your body. So if you are using MMS or any other toxin remover, parasite, pathogen killer and you are not pooping enough, you'll have a problem with the Herx.