​ CD Protocol 115 to Eliminate Viruses
​
Both CDS and CDH can be used with this protocol. See dosing chart below
which contain equivalent dosing for external and internal use.

This contains information on how to eliminate viruses using chlorine dioxide (CLO2) based on a study showing the effectiveness for a particular method. The method described is somewhat similar to using Clara's 6 and 6 Protocol.

This method also explains why Protocol 115 has been successful for many people who have used it. (See newer Protocol 115 Plus )

Also note that there are two ways to use Protocol 115.

The first way is taking 8 consecutive doses in a 2 hour period, every 15 minutes.

The second way is also taking 8 doses in two hours, plus 6 more doses at 1 dose each consecutive hour for a total of 14 doses for the day.

You can vary the amount of CLO2 per dose. Start low and work up, as usual. If dosing is the same for each method, then the first method (dosing every 15 minutes for 2 hours) will provide more CLO2 than hourly dosing for 6 hours.

You can increase hourly dosing for the additional 6 hours if desired. The first way is based on the idea of keeping the amount of CLO2 in your blood supply at or above a certain concentration.

The addition of hourly doses for another 6 hours is based on Jim Humble's idea of keeping CLO2 in the body as long as possible and from experience.

If the first method solves your problem, then you don't need to add the additional 6 hours of dosing. If your problem is not resolved, then use both methods.

NOTES: It is possible that results from studies similar to the Japanese study linked to on the next page, could be true for other pathogens besides viruses. Both CDS and CDH can be used with this protocol. See dosing chart file below which contain equivalent dosing for external and internal use.

Intravenous injections might be a more effective procedure than oral such as this protocol.

Get Your CDS & CDH Supplies Here
(Scroll down the page) 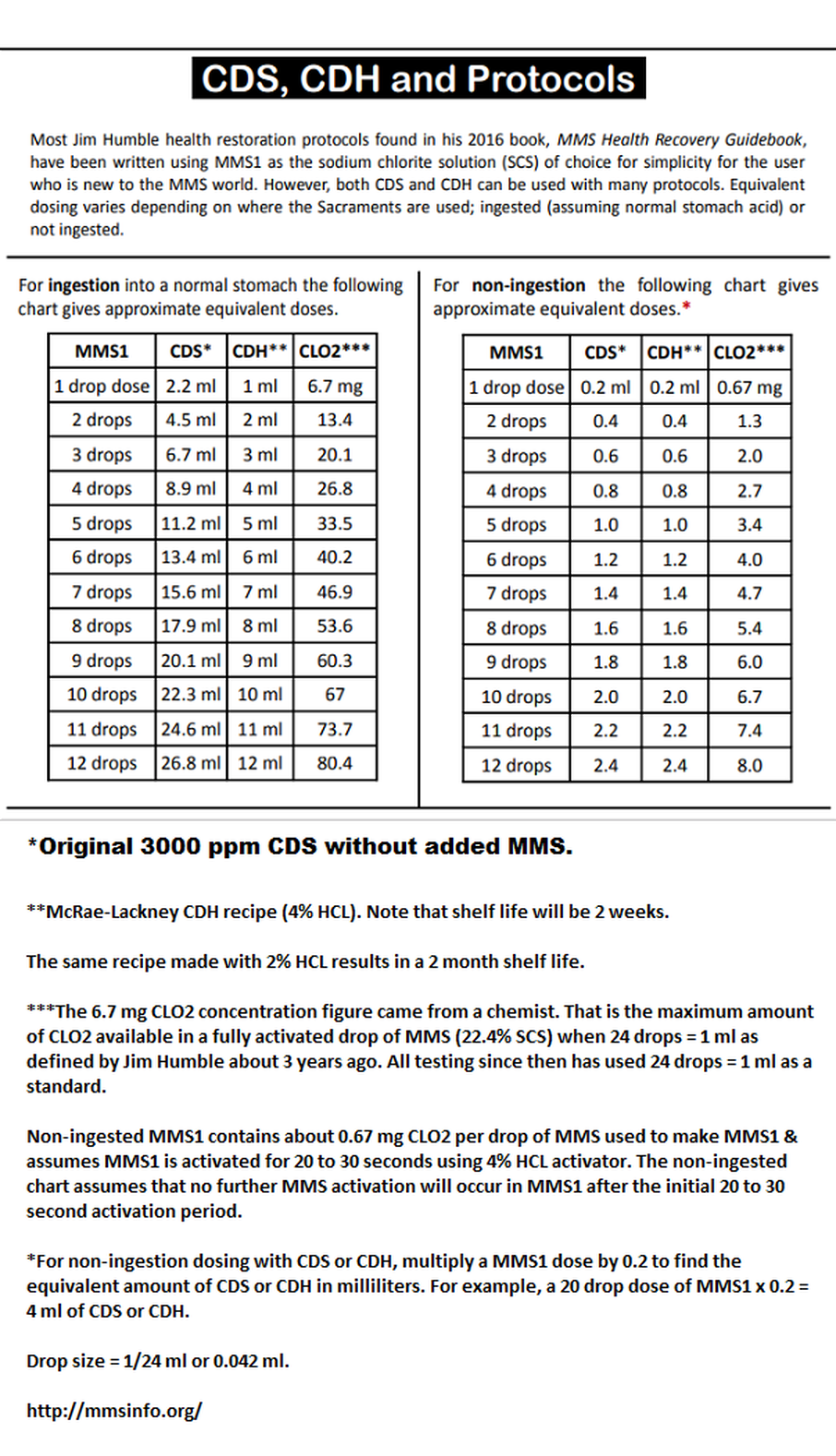 ​1 Here's something I recently posted on my The Ebola Cures Facebook Group page: I think we can use the following study to help us to get an idea of how much CLO2 a person should get into their blood for it to be effective to kill pretty much any virus - Ebola included.

Basically the study says that you need 10 ppm for 15 to 180 seconds to inactivate 99.99% or more of the viruses in a clean, uncontaminated medium. So using this 10 ppm as a guide for what is also needed in our blood and taking what we know about the amount of CLO2 per drop of MMS (22.4% sodium chlorite in a water solution), which is also the amount of CLO2 within 1ml of CDH, and which is approximately 6000 ppm per drop, we can roughly calculate how many drops of MMS/Sodium Chlorite/ ml of CDH are needed using a ppm dilution calculator found here:

​Using the last calculator on the page at the above link, plug in the following numbers for an average sized person which should have just about 5 liters of blood (or you can use 7% of a person's body weight as a guide to the amount of blood they have within their body - remembering that each liter of blood will weigh approximately 1 kilo).

So for the "stock solution - concentration" field in the above dilution calculator, (on the top line and on the left hand side), put 6000 ppm because that's what the ppm of CLO2 is approximately in 1ml of fully activated CDH or 1 fully activated drop of MMS/Sodium Chlorite in 1ml of water.

Then for the next field to the right, "volume", leave it blank but set the unit to "ml". Then in the field named, "dilute solution" which is below and to the far left, enter 10 ppm because that's the ppm that we want in our blood to inactivate pretty much any virus.

Then to the right of that enter 5000ml which is the amount of blood the average person has.

Lastly, since we know there are going to be losses of the CLO2, we have to compensate for that. So if we say there is probably going to be at least a 50% loss of CLO2 as it goes through the stomach and into the blood, we would simply double the number of drops or ml to consume to compensate for that loss. Keep in mind that our blood only needs to be at 10 ppm of CLO2 for about 3 minutes in order for 99.99% of the viral particles to be inactivated.

So, I think this can be a great tool for us to get some kind of an idea of how much CLO2 we may need to consume to help our bodies cure themselves of Ebola and basically any other viral disease. Again, all we need to do is get our blood at about 10 ppm of CLO2 for about 3 minutes.

Since there may be even more than a 50% loss of CLO2 on it's way to our blood, one way I've devised for basically saturating our bodies with CLO2 as much as possible is to take a dose every 10 to 15 minutes for one to two hours. One time by doing this, I was able to take 36ml of CDH in just 2 hours. I think I was pretty saturated and probably got myself over that 10 ppm for 15 to 180 second threshold.

By the way, I didn't have ANY adverse reactions or side effects to taking that much CDH in such a short period of time. The same goes for another time when I took 108ml of CDH over a 7 hour period.

One more very important observation about this study. You'll notice that the table shows and the authors mention the fact that the amount of time DOES NOT MATTER if the concentration isn't high enough. So, even if we dose all day long, 12 hours a day - if the ppm of CLO2 in our blood doesn't get high enough - to 10 ppm, we're not going to be able to get rid of the virus. This may be the reason that I myself haven't been able to get over colds as quickly as it seems I should have been able to, and I've heard the same report from others.

This very important piece of information makes it clear to me that it's not so much how long we dose during a day but the quantity that we can get into our blood over a very short period of time.

This is basically the way MMS has been used to cure Malaria. With malaria, the people typically get one LARGE dose of 18 drops of MMS all in 1 cup and taken all at one time. So what happens when you do that? Using the calculator, we can see that you get a potential of 21.6 ppm in your 5 liters of blood - all at one time! Now even if only 50% of the CLO2 made it through to actually be in your blood, you'd still be higher than 10 ppm and for probably longer than 180 seconds. Case closed - you're cured!

​Get Your Treatment Supplies 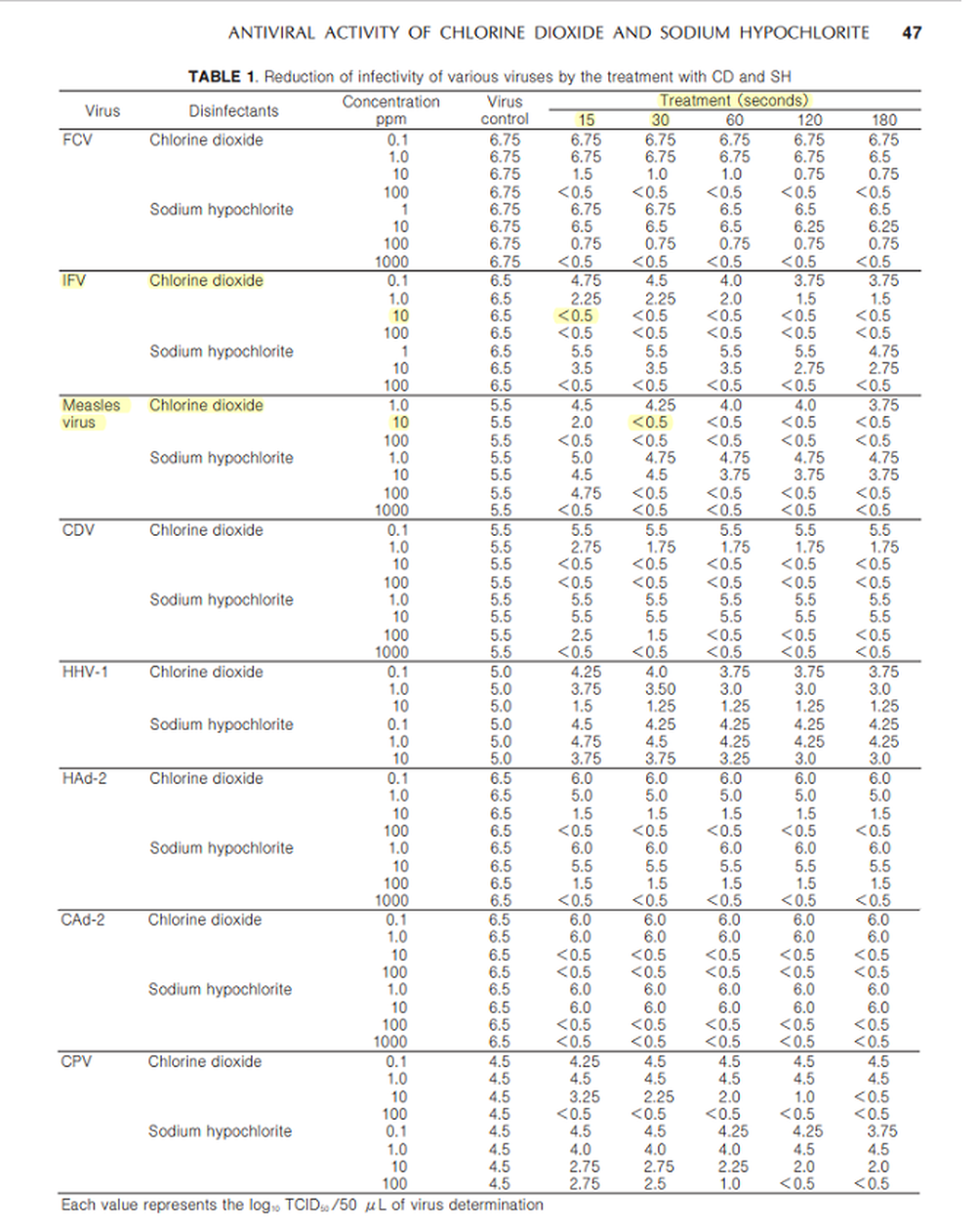 NOTE: Chlorine Dioxide does a much better job of virus elimination than Sodium Hypochlorite (Chlorine Bleach)...Just in case you forget that they were two completely different products.

The information presented on this page is for informational purposes ONLY and not intended to diagnose, treat, or
​cure conditions or be a substitute for advice from a physician or other healthcare professional. You are 100%
responsible for your own actions, if you chose to follow any information you find here.
Please see our Official Website Disclaimer