​Protocol 2000 is, in essence, our Cancer Protocol, but we are not naming it “Cancer Protocol” as such because it also works well for most other life-threatening diseases. have observed that more than 90% of those who use Protocol 2000 faithfully, and take responsibility for using it as directed here, overcome their cancer or other disease completely.

However, I must also mention that there are cases of cancer and other diseases that simply are too far gone for even MMS1 and MMS2 to help. Normally these are the cases that have had tremendous amounts of chemo, radiation, or surgery treatment and the body is simply “past the point of no return.”

​However, we never say never. If the person still has one more hour to live, get some MMS1 into him. See page 249 for more information on helping people with extreme conditions.

On Protocol 2000 you will:
● Increase the number of drops you take each hour to as many drops as you can handle (up to the maximum amount of drops for your weight—see page 92) without getting sick due to the MMS. In most cases the increase in drops is needed for cancer and other life-threatening diseases.

● Increase the number of hours you take your dose each day from eight to ten hours.

● At the beginning of the third or fourth day of Protocol 2000, you should begin taking MMS2 in addition to MMS1. The most important thing to remember is, never stop taking MMS until you are well. Remain on Protocol 2000 and any needed Supporting Protocols, as explained in the Health Recovery Plan, until you have fully recovered your health. 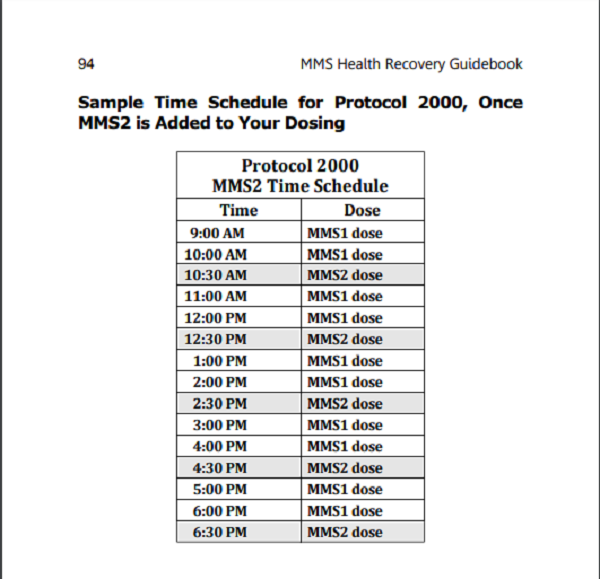 Keep your MMS1 doses constant. In other words, do not be working on increasing your drops of MMS1, while you are working up to your proper dose of MMS2, because if you get nauseous you will not be able to determine which of the two might be causing you to feel sick. Once you have reached the suggested amount of MMS2, then you can begin increasing your drops of MMS1 once more.


​Never take a dose containing DMSO and an MMS2 capsule at the same time! See pages 23-24 in the Health Recovery Manual for the full warning on this.
DISCLAIMER:  Let it be known that you consent and assume any and all responsibility in the consumption of any product you purchase as a result of your visiting this website or watching these videos. Furthermore, you accept any and all possible damage, loss or injury felt to be experienced as a result from one's exposure to any content, product or information discussed within these videos and the contend on these web pages. Remember, always consult with your medical practitioner or health care professional when dealing with any severe medical condition. All we provide here is INFORMATION. Use it how you wish knowing that you are responsible for your own actions.  This information has not been approved nor endorsed by the Food and Drug Administration.

Learn How to Use Chlorine Dioxide - CD (CLO2) Safely & Effectively.
Help Your Body Restore Your Health.

KVLab is a Trusted Source for CLO2 Water Purification Kits